How to play pickleball !

At once punchy, strategic and fun, pickleball is a paddle sport that comes straight from the United States and is booming in France and in many European and Asian countries.

A composite paddle of approximately
20 cm wide and 40 cm long for
a weight ranging from 200 to 300 grams.

A perforated plastic ball
about 7.4 cm in diameter and weighing between 22 and 26g.

A low tennis-like net with a height of 86 cm in the centre and 91 cm at the posts.

Specific to pickleball, there is a non-volley zone at 2.13m on each side of the net, in which it is forbidden to volley or smash. Players may enter the zone at any time and play balls, as long as they have bounced off their side of the net before touching it. In order to volley the ball after entering the zone, the player must have exited the zone and established his position outside the zone by touching the ground with both feet.

There is only one allowed serve per player that is done from behind the baseline, underhand and below the waist, it must be crossed and starts from the right to the left. The server may also drop the ball from his hand and serve after the bounce if he wishes. A serve that touches the "non-volley" line is " a fault " (which is not the case for a ball in an exchange) all other lines are considered part of the court and in. A ball that touches the net cord on a serve and falls back into the non-volley zone is a " fault ", if it falls into the service box it remains in play. Service "Lets" no longer exist according to the new 2021 rules.

The ball must bounce once on each side of the court ( once on the serve and again on the return of serve ) after which players can freely take the ball out of the air without letting it bounce.

How the game unfolds

In a rally, one of the partners of a team starts by serving and keeps the serve as long as their team scores, when the first server loses his serve then it is the turn of his partner (the second server) to serve on the side he is on, until the team commits a fault (ball in the net, missed or "out", double bounce...) and the serve passes to the opposing team.

When changing serves from one team to another and at the beginning of the match, the first serve is always on the right side. For each point won the two players of the serving team change places to alternate the side of the service for each rally.
The points are scored only by the serving team and are counted by announcing your score, the opponent's score and the server's number (0-0-1, 0-0-2...). 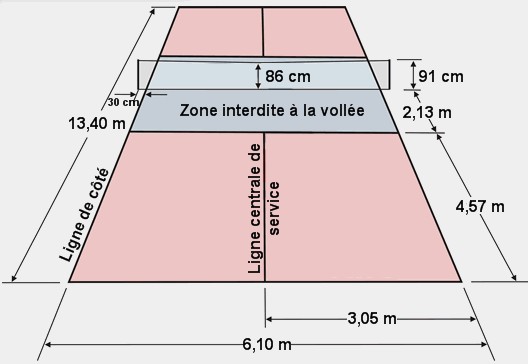 Only a few exceptions separate singles and doubles.
There is only one service per person and the side to be served from is determined by the server's score, from the right side for even numbers ( and 0 ) and from the left side for odd numbers.
The size of the court does not change.

Pickleball is a very popular sport in the United States with more than 3.3 million players. It is one of the fastest growing sports in the last 10 years.

The year of pickleballs invention

It is a sport that requires little investment,
simply buy a kit consisting of a net, 4 paddles and a ball. A few lines to draw and you're ready to play!